The Soo Locks is one of a series of inland Locks that enable freighter traffic to travel through the Great Lakes and ultimately out to sea. Originally built in the late 1800’s, the Soo Locks raise (or lower) ships the 21 feet difference between Lakes Superior and Huron. Since that sounded too cool for words, we hopped on the motorcycle and made the (almost) 2 hour drive to Saulte Ste. Marie from our Petoskey campground to check it out!

Before we left, however, we called the Soo Locks Visitor Center boat hotline, to ensure there would be something to see that day! Assured that ships were indeed due to pass through the locks within a few hours, we made a beeline up there. And we were not disappointed! As we arrived, we could see a large bulk freighter (a “Laker’) easing slowly into the narrow lock slip. The Visitor center includes a large green park area next to the locks as well as a 3 level observation deck. We passed through the (modest) security and dashed up to the top level viewing area.

We watched, fascinated, as the enormous ship slid delicately along the channel that seemed hardly wide enough to fit it. In fact, we could hear some slight grating as the ship made contact along the wood-clad side. Crewmen walked alongside, carrying and adjusting lines. Once in position, the ship halted and was tied up to the dock. This ship was headed inland (up stream) and needed to be raised 21 feet. A few minutes, and we could see the water level gradually rising. It is all accomplished by gravity alone, the water fed through channels in the bottom. As the boat rose, crew members constantly adjusted the mooring lines to keep the huge ship in position. 10 or so minutes later, the ship was 21 feet higher. We could see now that the ship was riding high in the water, obviously empty of cargo. A few more minutes, a horn tooted, and the forward gate opened. The ship chugged and goosed its engine a few times, slowly gained momentum and soon was churning out of the lock, headed to an unknown port to pick up a load of coal, iron ore, limestone, salt, or grain. 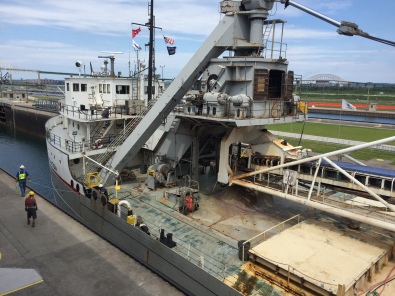 That ship was no sooner on its way, than another large (empty) Lake Freighter was maneuvering into position. We watched as the lock gates closed and slowly drained as it prepared for the next upstream-bound ship. This ship captain seemed to be a bit more experienced, as he hit the Lock channel dead center (no scraping this time!) and expertly put her into the right spot. We watched as the process repeated, and the captain smoothly pulled straight out toward the Great Lake. That guy was GOOD! I’d say he’s done it a time or two!

We wandered back to the small visitor center. It offers exhibits on the history and operation of the Lock system in general and the Soo Locks in particular. The trend is toward ever larger (and more efficient) ships – the Lake now hosts freighters that are 1000 feet long! Since only one of the Soo Locks can accommodate large freighters, another large Lock is planned for construction next year which will increase shipping throughput. (The shipping season shuts down January through March due to ice.) I was surprised that there is no fee for Lock transit, as it is owned and operated by the Army Corp of Engineers. The visitor center and viewing area is also free to the public. (Nearby street parking is metered)

After watching all of that work, we were hungry, so visited the aptly named Lock View Restaurant across the street. The eatery offered local white fish in several formats. Jeff ordered the whitefish sandwich while I opted for the whitefish wrap – both delicious. After dining, we headed south, back across the Mackinac Bridge, toward home.