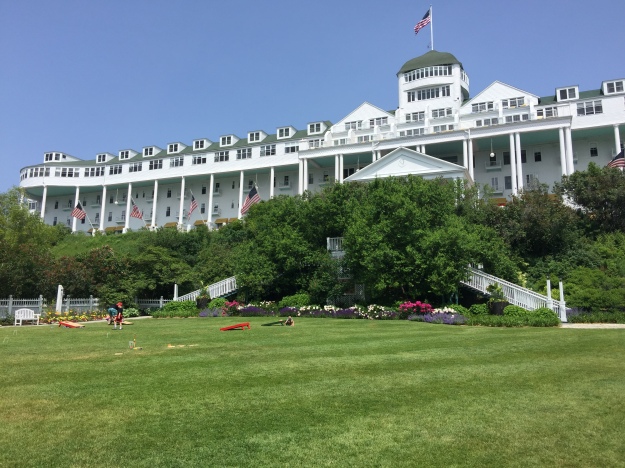 Our Mackinac Island adventure continues!  After cycling round the island, we headed to what was (for me, at least) the main attraction — the Grand Hotel!

Everything inland is UP, so the bike ride to the Grand Hotel parking area was a bit of a huffer-puffer. The exterior of the Hotel was just as I pictured – expansive, and, well … grand! Due to its popularity, though, the hotel charges $10 per person just to come in and look around. That seems rather presumptuous, but we paid it along with hundreds of others. I guess that pays for someone to continuously vacuum the carpets …..

We explored the hotel from stem to stern. From the first floor shops, up to the main lobby area, through historical exhibits, and up to the cupola bar at the very top of the structure. The view from there was fantastic! The hotel’s 660 foot front porch is the longest in the world – a photo can’t really do justice to the scale. On the porch we discovered Wonder Women, Captain Marvel, and Belle performing fan service. Cool! 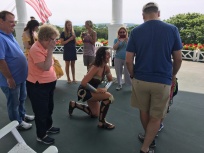 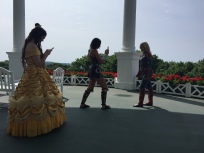 The extensive grounds feature gardens, a large swimming complex, even a labyrinth (which we walked). The huge lawn offered games to play — croquet anyone? Bocci ball?  We explored almost every nook and cranny, then headed on.

Jeff thought the exterior was grand as was the famed front porch, but the inside was nothing special. Nothing like, say, Yellowstone Lodge with its magnificently soaring log- framed atrium. Inside, the Grand Hotel looked pretty much like any other reasonably nice hotel facility. Was it worth the $10? It was for me, to see it once. I don’t think I’d need to see it again.

Heading on up the hill, we entered a neighborhood of massive and gorgeous Victorian homes. Summer cottages for the rich and famous, I’m sure.  We explored this for a while, then headed back down to town.

Mackinac Island does boast a year round population of several hundred hardy folks. As the ferry service cannot run in the winter, the only transportation off the island is by airplane. UNLESS, the lake completely freezes up (which happens some years), and then the islanders can travel to St. Ignace by snowmobile across this “ice bridge”. They save their Christmas trees and stick them in the ice to mark the safest route! Otherwise, they have only the amenities on the island. They do have a medical facility, post office, grocery store (with reasonable prices) and a school. Two restaurants stay open for the winter, and residents travel by horse and sled or by snowmobile. The islanders that live there seem to like having the place to themselves, at least, for a while.

On to town, continued in Part 3!