Moving eastward along the Colorado Plateau, we’re still in sculptured sandstone-land. However, Canyonlands and Arches National Parks do have their own unique features.

Canyonlands National Park is surprisingly large, with three distinct districts:  Island in the Sky, the Needles, and the Maze. Island in the Sky features hikes and look-out points high on the rim of a huge canyon. In fact, you can look down upon a “canyon within a canyon”, carved by the Green River far below. The Needles takes you to lower ground, at the rim of the lower canyon. The Maze is inaccessible, except by 4 wheel drive vehicle.  The Island in the Sky is the most spectacular section, in my opinion. On one end is a crater which had two possible explanations:  a collapsed salt dome or meteor impact. Based on visual inspection, Jeff judged it to be a collapsed salt dome, while I rooted for meteor because that was just so much cooler. Later, Wikipedia disclosed that a study had been done and concluded it was, in fact, a meteor impact crater. HA! 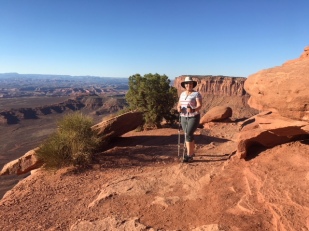 Arches National Park features, well, arches. A gigantic underground salt dome pushed the earth up eons ago, fracturing the surface rock. Water intrusion dissolved and ultimately collapsed the salt dome, leaving ribs (fins) of sandstone on the edges that are thin enough for erosion to readily create holes, caves and arches. In fact, Arches National Park has the highest concentration of natural arches found anywhere in the world. The arches are just transient formations, as inexorable erosion forces form them and eventually destroy them.

Interesting features can be found outside of the parks as well – petroglyphs and dinosaur tracks! “Newspaper Rock”, found a few miles outside Moab, features an unusually dense collection of petroglyphs. Although you can clearly discern human and animal figures, no one living knows exactly what they’re meant to convey.

Not all arches are in the National Park either. We hiked to Corona Arch, off of Potash Road outside of Moab. That hike had some features that I wasn’t QUITE ready for, including cliff side walking (holding to a cable), climbing a ladder, traversing steeply slanting sandstone next to a deep drop off, and pulling myself up a rock face with a cable. I only cried a little, but I made it! (And then had to go back!) The arch WAS spectacular, though. 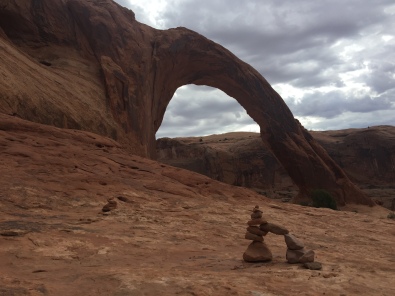 We had the fun of exploring some of this area with our new RV friends, Dennis and Kim. Also from Florida, we met in the Yellowstone area and found our travel itinerary was almost identical to ours, at least for the next few stops.  They also have a Harley and enjoy the outdoors, so we had some fun here and also have plans to meet up again down the road!

Moab is definitely a tourist-y town and is quite the busy place. I can understand why, since it’s an outdoor mecca for rock climbing, hiking, mountain biking and 4-wheeling. The downside is crowded trail heads, nonstop traffic, and sold-out RV parks! Moab is a blast, but is a place that you definitely want to book well in advance.

Next up:  Durango, Colorado!