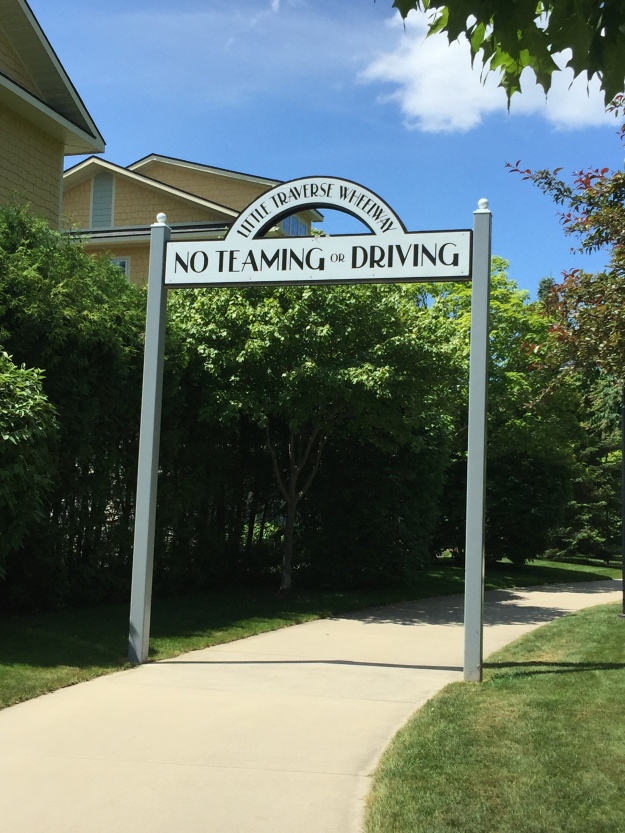 We are finding in our travels that many towns have embraced the concept of off street paths for biking and walking. It’s SO much safer and more pleasant to ride dedicated bicycle lanes, enjoying the sights and exercise. I hope the trend continues and expands!

The Little Traverse Wheelway passes literally across the street from our RV park. The street happens to be a busy highway, which is a bit of a pain to get across, but once on the other side we have full access to the paved path. The 26 mile “rail to trail” bike path extends from Charlevoix to Harbor Springs, and we are located just north of the middle. On the 4th of July we saddled up, crossed the busy road, and headed north toward Petoskey.

The trail followed along the road for a while, then ducked toward the shoreline through city parks and private lands. At this point we were on a bluff above the beach, but soon the trail descended to lake level as we approached Petoskey. Late-blooming lilacs scented the cool breeze. We took occasional breaks to walk the shore and search for Petoskey stones. We strolled out on the Petoskey harbor breakwater to the small light house at its tip. We watched as two youngsters dove from a passing boat to swim (race) to the breakwater while their parents docked the boat. We observed to make sure they made it OK (it seemed like a long way to me), but they handled the distance quite competently! 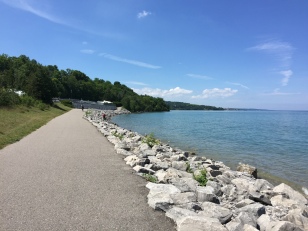 We cycled through Bayfront Park, which was surprisingly uncrowded on this 4th holiday. In South Florida, every park would be overflowing! The scenic lakefront park includes a waterfall flowing down the bluff which was popular on this warm day. 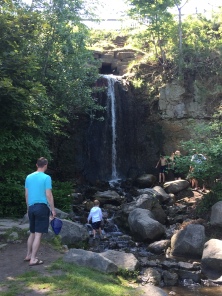 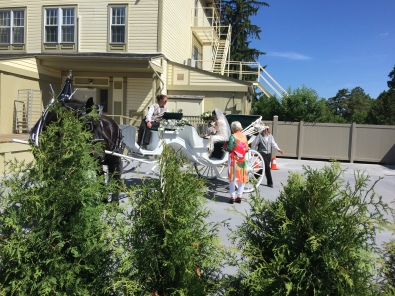 Continuing on past downtown Petoskey, we headed north toward Petoskey State Park. We didn’t reach the northern terminus, but flipped it around after reaching the 10 mile mark, to head back south. Near town, we happened across a carriage preparing to take a bride to her wedding. We called out our congratulations as we cycled by.

It was approaching lunch time (and it had gotten QUITE warm), so we stopped for a bite. A steep ramp / staircase from Bayfront park led up to the Petoskey downtown area. We had originally targeted a Thai place, but it was closed for the holiday, so instead opted for American cuisine at Chandler’s Restaurant. My cobb salad was delicious and Jeff’s 5 Dragons sandwich (their spin on a classic Reuben) was so huge, he packed half home. Cooled off, rehydrated and replete, we remounted our bikes and took a leisurely spin back home for a total of 20 miles.

Next time, we’ll head south and see what is happening in that direction!