In yet another ploy to lure visitors during “off peak” times, Epcot offers the Flower and Garden Festival from early March to early June. And it works! The continuously changing face of Epcot draws seemingly never-ending crowds.

The Flower and Garden Festival, as you might expect, features a bright array of flowers and plantings. The Park simply bursts with bright colors in planting beds and floral arrays everywhere you look. Highlighted are the fanciful topiaries of beloved Disney characters, placed in appropriate locations for the theme. For example, the Beauty and the Beast topiaries are located in France, while the Toy Story topiaries are located in Future world, near the Mission to Mars ride. Just like the other Festivals, a guide to all of the offerings and features can be picked up at the entrance so you won’t miss anything. 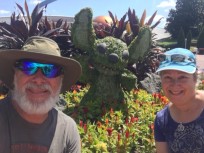 It’s not just about the Disney topiaries, either. Other attractions include a butterfly aviary and specialty plants in various countries.  Japan showed off beautiful bonsai trees and China exhibited topiaries of all of their zodiac signs. (This is the year of the Dragon) Two beautiful new play “gardens” (playgrounds) sprouted up for the younger set for the festival. I hope they keep those around, because I do think Epcot needs more amenities for the under-8 set. Of course, all of the outdoor kitchens fired up again, re-branded and with new offerings complementary to the theme.  It isn’t Epcot without eating and drinking around the world! 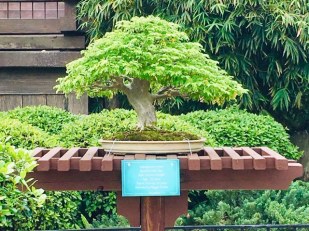 Like the other Festivals, this one has a concert series called “Garden Rocks!”.  A variety of artists are scheduled throughout the festival to perform their greatest hits. We caught “Air Supply”, one of my favorite duos from the 70’s,  the original artists still touring after 44 years. They were fantastic – very enjoyable!I’ve simply never seen a bad Disney-sponsored concert.  There are some great artists still in the line-up and if we were going to stick around longer, we would go back just to catch the shows. However, this was our last Disney outing for a while, since we are currently heading North to our next stop;  beginning our Midwest loop.

I guess if we lived in Florida all of the time, we might get blasé about Disney. But, after quite a few visits (I’ve lost count) in past months, it still really hasn’t gotten old. There always seems to be something new to do, or something to re-visit. There’s just SO MUCH offered between 4 theme parks and network of resorts.