The second day entailed diving the famous Royal Mail Ship (RMS) Rhone, after completing an upwind spirited sail in 15-20 knot winds to Salt Island. The RMS Rhone was wrecked off the western point of Salt Island during a hurricane in 1867, killing 123 people. Apparently, the practice at the time was to tie passengers to their beds to prevent injury during rough seas. This practice likely led to the high number of casualties. The ship broke in two after striking a reef, leaving large bow and stern sections. Only 25 people survived the wreck. The bow section is located in 80’ of water while the stern section is located in 30’ of water, which makes for a great dive profile provided you do the deeper bow section first. The sailing masts are still evident laying on the sea floor. The RMS Rhone was featured in the 1977 film, “The Deep” starring Jacqueline Bisset. Pat and James, two of our crew members, saw a rather large Barracuda, appropriately named Fang, inside the ship’s bow while diving. Both of us saw a 6’ Black-Tipped Reef Shark swimming about during our dives.

Night two and dinner was spent at Manchioneel Bay on Cooper Island. After a fine dinner, we visited a Rum Bar which featured multiple vertically-stacked rows of rare-aged rums, unique house infusions featuring flavored and spiced rums, and classic cocktails made with Caribbean rums. After imbibing various samplings at the Rum Bar, it was time make our way back in the dark to Jillsee, our yacht. MB’s repurposed night-running arm bands provided a flashing homing beacon to follow. Without some kind of homing beacon, it would have been much more difficult to discern our yacht from the other fifty yachts that peppered the dark bay. 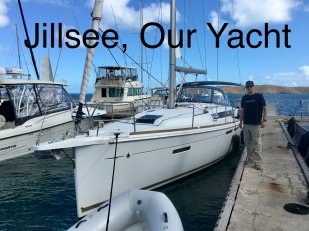 Day 3 yielded another early start, departing around 7:00 a.m. from our comfortable night spot to the famous Baths. The Baths are one of those “must do” spots in the BVI, created from immense granite boulders un-neatly stacked in various ways and varying heights. The jumbled granite abruptly meets pristine white sandy beaches bordering the Baths. After attaching the dinghy to the dinghy line and swimming ashore, we proceeded into the well-marked pathway leading into the Baths. Progress through the maze is assisted by set ropes, steep stairs, and colored direction arrows painted on the granite. Ankle to waist-deep salt-water pools are dispersed in and around the granite maze. 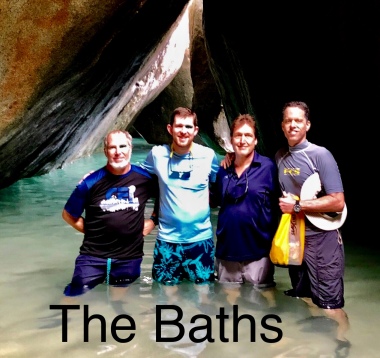 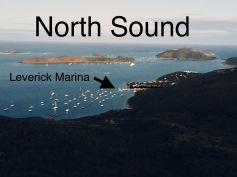 After a short dinghy ride back to Jillsee, we sailed predominantly close-hauled in 15 knot winds to Leverick Bay located in the North Sound of Virgin Gorda Island, a journey of about 9 miles as the crow flies. The North Sound area is home to two of Sir Richard Branson’s islands, Mosquito Island and Necker Island. Both of these islands operate high-end resorts. Barack Obama visited Mosquito Island in 2017, where he learned how to kite surf. Another nearby island, Eustatia Island, is owned by the CEO of Google (Larry Page). All of these islands are within view of North Sound.

After piloting the boat into North Sound, the crew readied the yacht for docking at Leverick Bay Resort and Marina, which was our first planned slip location in the islands. The yacht was cautiously backed into the assigned slip so that shore power could be connected. After refilling our water tank, plugging in shore power, and turning on the air conditioning, we ventured over to the local bar for happy hour. Jumbies Beach Bar has the pirate show hosted by the legendary Michael Beans, which after 2 for 1 pain killers, was magically entertaining for his “Happy Arrrrr”.

“Happy Arrrr” doesn’t last forever, so afterwards a taxi ferried us up to Hog Heaven Restaurant for some heavenly ribs and chicken, and of course more pain killers. The view from the top of the mountain restaurant was spectacular and the food was extremely tasty.

The next morning we could not help but to notice the very high-technology boat next to us in the slip. This roughly 30 plus foot, fully-enclosed go fast boat, was equipped with all the most modern electronics. The dock hands informed us that this boat was owned by Larry Page who uses it for transportation and joy rides to and from his island. While leisurely sipping on our morning coffee we observed a Captain on a 45’ catamaran, who inadvertently forgot to untie a dock line, lose control and collide with the dock and the corner of a building. Ouch! After briefing our crew on the dock departure plan we left our slip without incident…..whew! 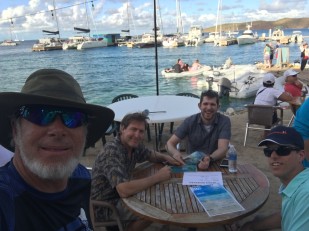