The area in and around Bentonville Arkansas is surprisingly bicycle-friendly. The backbone is the 38 mile Razorback Regional Greenway trail, which extends from Fayetteville northward through Bentonville. Substantially funded by the Walton Foundation, this paved multi-use trail connects parks, green spaces, and a number of other trails. We picked a beautiful Indian summer day, and saddled up!

We parked in downtown Bentonville and headed north, exploring the northernmost 8 miles of the trail. Along the way, we passed through parts of downtown and by homes creatively decorated for Halloween. We also meandered through the grounds of the Crystal Bridges Museum of American Art which displays a number of interesting sculptures. 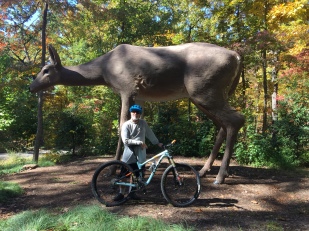 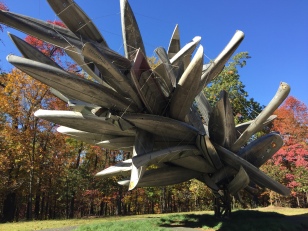 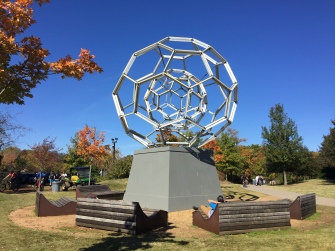 As a chemist, the sculpture I was most taken with is the Buckyball. What is a buckyball, you say? Short for Buckminsterfullerene, it is a spherical nanoparticle made of 60 carbon molecules. Postulated in the late 1960’s, the molecule was first created in 1984 by scientists who used a laser a laser to vaporize carbon in a supersonic helium beam. Aren’t you glad you asked? The sculpture is an artist’s rendition of a super-giant molecule. Or, it’s a soccer ball skeleton. Whatever floats your boat.

The weather was sunny and perfect as we cycled along through the Arkansas countryside. The trees were decked in their colorful Fall finest. We hit the northern terminus of the trail and looped around, back toward town. 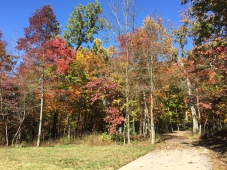 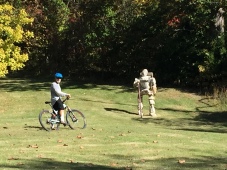 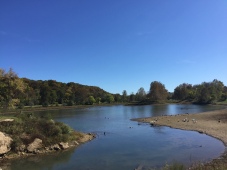 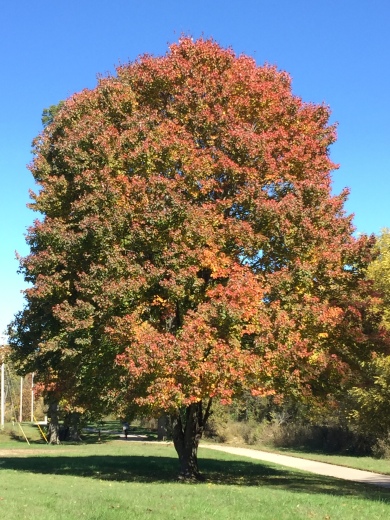 Closing in on our parking spot and desiring to quench our thirst, we stopped in at the Tusk & Trotter for a late lunch. The restaurant offers locally brewed beverages and fresh, tasty fare. My BBQ sandwich and hard cider was delicious, and Jeff made short work of his “carnivore” flatbread. And a bit of trivia – the restaurant space was once Sam Walton’s office and general warehouse.

2 thoughts on “Biking in Bentonville”