I find ancient rock drawings endlessly fascinating. We’ve explored a number of places in the southwest that host collections of petroglyphs including Three Rivers Petroglyph site, Valley of Fire State Park, and fascinating newspaper rock outside of Moab. The latest is located just outside of the city of Albuquerque – Petroglyph National Monument.

Although the petroglyphs have been there for 600 years, Petroglyph National Monument is a very young Monument. It wasn’t until 1990, with Albuquerque development encroaching on all sides, that the National Monument was officially designated. The park has a small visitor center and several trails, 3 for viewing petroglyphs. Unfortunately, the bubbly basaltic stone matrix in this area doesn’t seem to highlight the distinctive designs as well as other places I’ve visited.

One of the great mysteries is the meaning of the petroglyphs. In this visitor center’s film, a contemporary Native American postulated that the signs were tribal markings, left to document their passage as they migrated seasonally. Kind of a “the Mighty Ducks were here” message. That’s a good a guess as any!

We also visited the International Balloon Museum, located beside the Balloon Fiesta field. The field looked very much different from the previous Balloon Fiesta week! The deserted field was being irrigated, and the white tents were open and vacant. We had received free admission tickets from Rainbow Ryders, so took advantage of that fact to see what the museum had to offer.

The museum described the history of ballooning and different types of balloons and equipment developed over the years. A fascinating exhibit detailed the Swedish doomed Arctic Balloon Expedition of 1897. Three men set out to cross the polar ice via balloon, but crashed after only 2 days. Inadequately prepared for the conditions, they attempted for months to trek to safety, unsuccessfully. The fate of the expedition was unknown until their bodies were discovered 33 years later.  Even now, mystery surrounds their final cause of death.

The museum also describes different kinds of ballooning including “around the world” expeditions and high-altitude ballooning. It even showed video and artifacts from the 2012 Red Bull Stratos jump – during which an Austrian skydiver jumped out of a balloon at 24 miles of altitude! In the process he broke 3 world records:  highest manned balloon flight (127,851 ft.), highest altitude jump, AND he became the first human in history to break the sound barrier without any form of engine power. That is a whole ‘nother level of crazy! 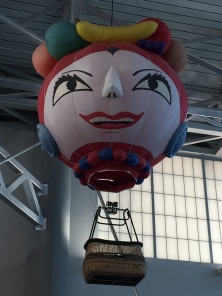 I also enjoyed the museum’s “4D” balloon ride movie, especially since I still haven’t taken my scheduled hot air balloon ride! It was supposed to have occurred during last week’s Balloon Fiesta, but was scrubbed due to weather. I rescheduled for this week and again, high winds forced rescheduling. I am now slated to go up on our very last day in town, so hopefully the weather will cooperate!

I will let you know.