It’s nice to settle down someplace for a few weeks. It gives us a chance to catch up on all of those tasks that we can’t seem to get to when we’re constantly on the move. Things like:  getting hair cuts, stocking up at Wal-Mart, having the motorcycle serviced, and washing the bus. It also gives us time to catch a movie (we saw “The House With A Clock In Its Walls”), and just have some relaxation time. It’s a lot more like real life than a vacation, which is good for a while!

That doesn’t mean that we haven’t gone out exploring! Santa Fe’s compact downtown is surprisingly artsy, with several museums and art/craft galleries. It is also home to the Cathedral Basilica of Saint Francis of Assisi, a beautiful 1880’s era cathedral that rivals some I’ve seen in Europe. The railroad station area hosts a Saturday morning Farmer’s Market and Craft fair. We just checked it out last weekend, but this Saturday we are going back with a long shopping list! One of the New Mexico specialties is freshly-roasted, locally-grown green and red peppers. Mmmmmm. 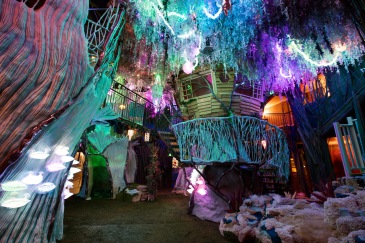 One museum we visited is quite unique: Meow Wolf. I’ve never seen anything like it. It’s described as an “immersive, interactive art experience”. It’s part art gallery,  part mystery/fantasy story, part maze, and part hippy-dippy psychedelic fun.  Opening in 2016, it was substantially funded by “Game of Thrones” creator George R.R. Martin. The “story” that you can explore revolves around a family’s mysterious disappearance. You start out in their modest two story home, where clues are scattered about. Unlike most art museums, you can touch, open, and explore literally everything. You quickly find yourself drawn through portals (such as in the fireplace or through the refrigerator) into wild and wacky alternate dimensions. Everything is connected to everything else as you wander through the maze of rooms, discovering hidden passages and a variety of interactive playthings. It almost defies description, but it is certainly great fun! It helps to be somewhat agile, as some of the fun involves squeezing or crawling through narrow passages, climbing steep spiral staircases and navigating uneven surfaces. The successful concept is apparently expanding to Denver and Las Vegas.

We also connected up again with our RV friends Dennis and Kim, for a motorcycle ride up and around the mountains. The terrain variety here in northern New Mexico is surprising to me – some areas look like Colorado, some places are reminiscent of Tennessee, and other areas look like Montana. It’s certainly not just desert! We had a marvelous ride, even though we got drenched at the end by a rainstorm. That just adds a bit to the excitement. Alas, they are moving on tomorrow as they continue back home to the Villages. We’ll meet up again back in Florida!