We hadn’t initially planned to stop here in Durango, Colorado – but it’s worked out beautifully! Our RV park is a deal, and we’ve been having a great time here with our RV friends Dennis and Kim.

Durango is home to the Durango & Silverton Narrow Gauge Railroad, a perfectly maintained 1880’s era coal-fired steam train. The four of us booked tickets for the 8 am Durango/Silverton round trip journey. Seated in the car just behind the engine, we had a beautiful view of steep canyons and mountainsides that aren’t accessible by car. Puffing along at a brisk pace of 12 mph, it gave you a feel for what railroad travel must have been like back in the day. Seeing the steam billowing, getting peppered by cinders (if you opened your window) – it was like traveling back in time. Traversing the cars and between-car platforms on the pitching/swaying train back to the snack bar car was an adventure in itself! I hadn’t thought about the need for water for these old steam trains – we stopped twice on the 4 hour outbound trip just to take on water. After our break in Silverton for lunch, we boarded the train for the 4 hour return trip. It was a long time to be sitting on the train, but so fascinating! 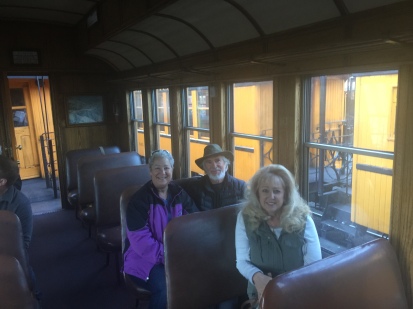 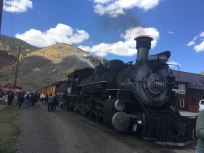 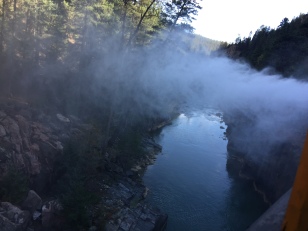 About 45 minutes west of Durango lies the Mesa Verde National Park. This park protects nearly 5000 known archeological sites (including 600 cliff dwellings) of the Ancestral Pueblo people. Established in 1906, it was the first Park to preserve cultural sites, rather than grand landscapes. The cliffs are literally peppered with cliff dwellings, but to get up close and personal with the dwellings, you have to book a tour.

We arrived bright and early, just after the visitor center opened, and managed to snag tickets for 2 tours ($5 per person for each tour) for Cliff Palace and Balcony House. The fact that the dwellings are IN a CLIFF, means you have to somehow descend the cliff, tour the site, and then ascend the cliff, usually by steep steps and ladders. Our Balcony House tour involved ascending 4 ladders (one was 33 feet high!), navigating steep winding rock steps, and crawling through a tunnel that was about 18 inches wide and 30 inches high. Never fear, there are other archeological sites to view that aren’t quite so adventurous! 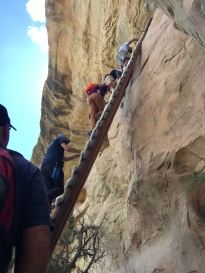 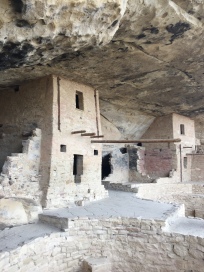 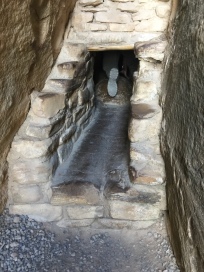 We also saw a surprising amount of wildlife on the mesa top. A coyote crossed the road in front of us, looking back curiously before heading on his way. A flock of turkeys gobbled on the plain. A mule deer buck sauntered across the road, followed closely by a doe. He seemed unfazed, but she looked at us, startled, before bunny hopping into the bush. A herd of wild horses trotted briskly across the road, the  looked back at us tourists sagely before sedately continuing single file down the slope. I wish I got some photos, but they were always too quick! All in all, a very interesting and unique Park to visit.

Another day, the four of us mounted our Harleys and headed on a loop up through the mountains. We encountered a few rain showers here and there, but the fall-tinged scenery was spectacular. The aspen trees looked like golden lamps, lighting the mountainside. An absolutely gorgeous ride in wonderful company.

For an unplanned stop, this place has been just awesome! Next, we’re on our way to Santa Fe!  (I’m a poet and don’t know-it)