Motorhome life can be a bit – unpredictable.

We pulled into our current campground near Kalispell Montana last weekend, checked in, and headed for our designated site. This older campground was recently purchased by a new owner and has started improving the roads and sites by putting down fresh gravel. Although plenty long enough, the site was narrow (for us), requiring trees to be trimmed on both sides simply to allow us to put our slides out. Once that was accomplished, we attempted to level the bus. Fail. The site was so sloped, that even putting blocks under the rear tires didn’t allow us to completely level the bus. Our auto-level system did its best, but left one of our dually tires an inch off the ground. Not ideal, but we didn’t have a whole lot of other options.

A few days later, a better site appeared to become available, so I approached the office about the possibility of moving, and they said yes, so long as we moved that day. So we prepared to move over 3 spaces – packed up, jacks up, slides in. Then we discovered ….. the tire that had been lifted off the ground was now flat! Yikes. We weren’t going anywhere soon.

We pulled out our small portable air compressor and filled, and filled, and filled. It’s a really big tire! Finally the tire pressurized, but then started  hissing, punctured by an object unknown. Since we still wanted/needed to move, we filled the tire as best we could and hoped it would hold air long enough. We carefully maneuvered over to the new site and re-situated ourselves. This site also required some branch trimming, but was MUCH more level and better situated for us. So one problem solved, but another discovered.

I had the bright idea to call the Coach.net emergency roadside service number (service provided 3 years for free by Entegra). We weren’t on the side of the road, but they do cover tire issues. They contacted a local tire firm on our behalf, and arranged for them to bring a new tire to our site a couple of days later.

To prepare for our service, we had to pull up the jacks and pull in the slides (again). The tire guy arrived promptly, jacked up the bus, and removed the tire. The “object” was half of a needle nose pliers, spiked right into the tread! Who knows where we may have picked that up. Fortunately, the tire was repairable, so a patch was applied on the spot. Tire re-inflated, remounted, and we were good to go!  The best part: no charge. The service was entirely covered by our Entegra-provided Coach.net service.

Although somewhat inconvenient, we were also blessed that we didn’t become disabled while on the road in some remote location. The un-level site was blessing in disguise – had we not been adamant about moving, we wouldn’t have discovered the problem until departure day, which would have been much more problematic. And the fix didn’t even cost us anything.

Our angels are watching out for us! 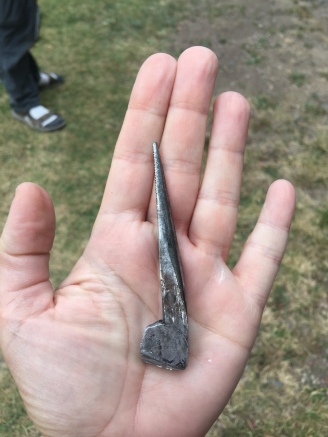 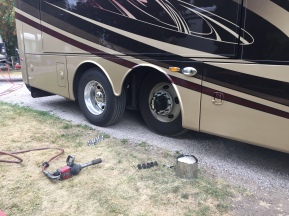 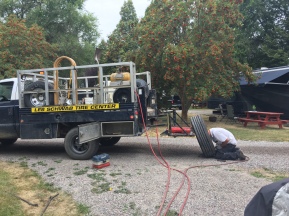 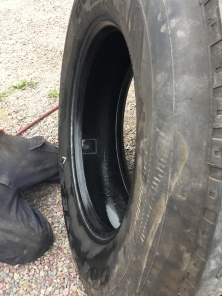 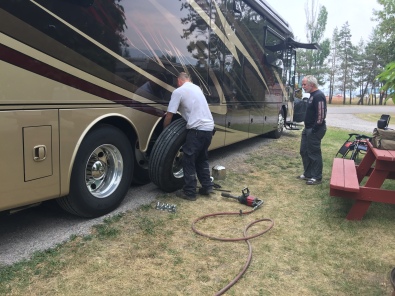