This is the second part of Jeff’s guest post!

On day two, I decided to head all the way up the mountain. After all, this was my last day here, and I wanted to make the most of the mountain. Enough trails were completed on the first day on the lower mountain that it seemed to make sense to skip this section until later that day. There was a pronounced thermocline heading up to the Garbonzo area. The wind picked up a little and the temperature dropped about 10-15 degrees. Although the chairlift passed through a cloud at one point, I was able to start the trails with great visibility and sunshine. I took Una Mas (a blue free ride trail) followed by Mid-Guard, South Park, and Earth Circus (all very large, sweeping downhills with jumps) down the other side of the mountain to the bottom of Creekside, and took the Gondola back up.

After getting off the Gondola, it was time for Freight Train (black diamond free ride trail), followed by an accidental double-black diamond technical run called No Duff. Oops, I didn’t mean to do that! This double-diamond run was about the sketchiest run I had ever been on.  Some sections I walked down, and on other sections I wasn’t sure what to do – it was that steep! The rock section was about 100 feet down and I couldn’t even get an eyeball on  parts, due to the grade. Ultimately, I was faced with three choices:  head back up to the junction (a long, steep uphill), slide down on my butt (with the bike) or take my chances on the downhill.  (This is where the downhill rig would have been very helpful!) After some water and more contemplating, I decided to mount my steed and cautiously head down. Whew, made it!

After the sketchy downhill this trail took me to an open field area, where I noticed another black bear a little distance off the trail. I took my camera out and shot a couple of bear pictures. Shortly thereafter I saw that this black bear had 3 small cubs with her! This is something not to mess with, so this time I scurried off down the trail with extreme urgency. I finished up doing black and blue free ride and technical trails, with a couple more double-diamond ones thrown in the middle. By the end of the day, I was a little more comfortable with the more extreme trails. I packed my stuff and drove back to Ferndale, Washington, very happy to be in one piece. The only casualty was my Reverb seat post, which broke on one of the many jumps. 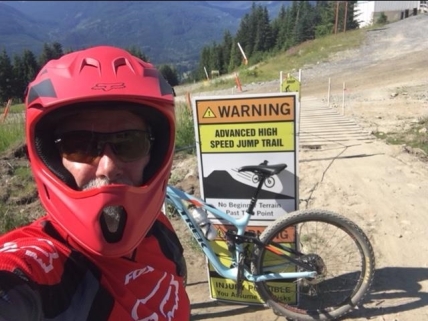 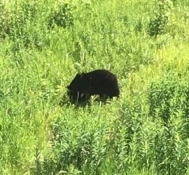