Yesterday we mounted the motorcycle and headed west toward the Oregon coast, a beautiful curvy ride over the forested mountains to the sea. It always amazes to me how effectively the mountains block the cool sea breezes.  While temperatures reached 90 degrees in the valley, the immediate coastal region remained in the chilly, sweater-worthy 60’s.

Reaching the small beach town of Lincoln City, our first stop was the Chinook Winds Casino Resort, owned by the same Siletz Indian Tribe as our Hee Hee Illahee RV Resort. Although the purpose of our visit was to break some large bills from our cash stash, we couldn’t resist checking our their blackjack tables. Not expecting much, I was pleasantly surprised to find standard 3:2 blackjack rules at a $3 minimum table! While Jeff took care of business, I promptly plopped down at the table to play a few hands. When Jeff re-joined me, we both played for a few minutes, cashing out at $7.50 up.

As it was nearing lunch time and we already liked this place, we decided to join their players club and score a few dollars off their lunch buffet. It turned out that it was a “Boomer Tuesday”, and members over 55 get a special buffet discount. We had a delightful buffet lunch for a grand total of $11.90! As new members, we also got $5 free promotional slot play, so stopped to use that up before we continued on. Jeff promptly lost his promotional dollars, but I hit an uncharacteristic slot machine winning streak and walked away with $26 cash. We strolled away from the casino stuffed, smiling, and with $20 more in our pocket than we walked in with. This casino is great – clean, relaxed and super friendly. It even has a “help yourself” soda and coffee bar, which I’ve NEVER seen at any other casino. We’ll probably go back next Boomer Tuesday.

We continued on south down the coastline, which is strewn with small parks and beaches. The vibe is laid-back and uncrowded. The view is spectacular, displaying ancient lava flows meeting boiling seas. The tidal swing is much larger than we are accustomed to, with 8-9 feet difference between high and low tides. We were there around low tide, exposing tidal pools and expansive beaches.

Farther down the coast we happened upon Yaquina Head outstanding natural area and lighthouse, the second-oldest (and tallest) lighthouse on the Oregon Coast. Run by the Bureau of Land Management, entrance to the park would have been free to us, had we remembered to bring our Park pass. (darn!) We paid the modest $3 motorcycle entrance fee out of our winnings. We were too late to participate in one of the lighthouse tours, but browsed the informative visitor’s center, walked around the lighthouse and watched the seals at play in the cove before heading back.

Just another day in the life of full time adventurers! 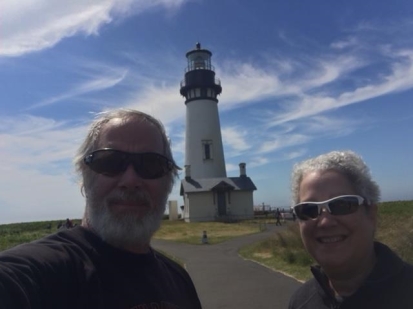 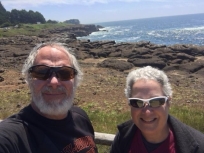