It’s been a while since I blogged because we were basically off the grid for the last week. At our very nice RV park (review to follow), we were far enough out to be virtually unplugged – no over the air TV stations, no satellite TV due to trees, and our AT&T signal was nil. We had to drive a couple of miles over to the nearest town and park next to the general store to make a phone call! An occasional text could get through, but that was about it. We managed to survive.

Crater Lake was formed about 7700 years ago when volcano Mount Mazama blew its top, spewed lava and collapsed – leaving a perfectly formed basin. Centuries of precipitation (snow and rain) created the deepest lake in the US, almost 2000 feet deep. Since the lake is filled only by precipitation (no streams flow in or out of the lake), it is uncommonly pristine and contains the bluest blue water you’ve ever seen. Part of the rim drive was still closed for the winter (due to snow) during our visit, but there were a number of accessible overlooks. We only had to hike through a little snow! During the summer, it is possible to hike down from the rim to the lake and take a boat ride. Truly a unique and beautiful National Park.

Crater Lake is in the southern Cascade Mountains. When I think “cascade”, I think of water, and there was water aplenty in and around this area. We saw deep water-carved gorges, waterfalls of all heights and shapes, even a spot where two rivers collide head on. At one point on the Rogue River, the river plunges through an ancient lava tube, re-emerging 200 feet downstream, which is a pretty neat trick! The area is surrounded by forest-lined scenic byways, just begging for a motorcycle ride. The weather was cool and pleasant – perfect for exploration.

As our introduction to Oregon, this place was pretty darned awesome. 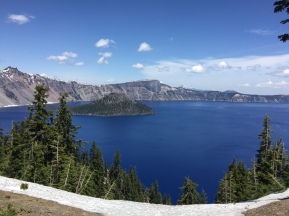 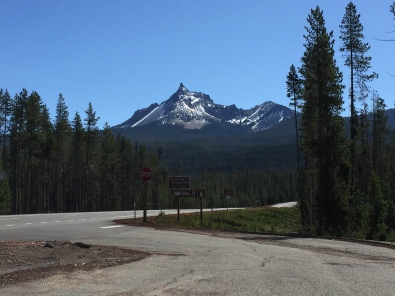 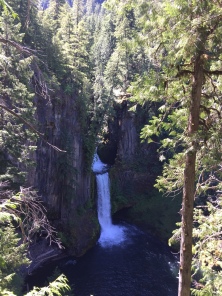