Have you ever heard of Lassen Volcanic National Park? I hadn’t either, until we planned our itinerary here! This underappreciated park has examples of all four volcano types: shield, cinder cone, plug dome and composite. If you don’t want to Google that, I’ve posted the definitions below. The main feature is Lassen peak, which blew its top only about 100 years ago.  The park landscape was shaped by the upward push of volcanos, and carved into deep valleys by glaciers. Fire and Ice. 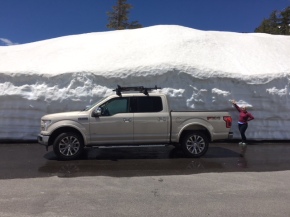 The park isn’t huge by Western national park standards – we drove the main road through the park in only a couple of hours. But there was a lot to see in that relatively short space. Due to Lassen peak’s height (10,500 feet) and profuse winter snowfall, the main road had opened only a few days before our arrival, although giant snow drifts were and alpine lakes were still in the process of gently melting.

Because the Lassen eruption was so recent, it’s aftermath was quite evident in ejected boulders, rocky jumbles, and areas devastated by mud and lava flow. The area is in the re-forestation process, slowed somewhat by the relative lack of area rainfall. By contrast, Mount St. Helens has reforested much more quickly.

In the valley, wildlife is abundant. During our 2 mile stroll around one of the lakes, we saw squirrels, ducks, geese families, and the occasional saucy chipmunk. We walked under tall fir trees that shed very large pine cones! It was one of those beautiful, cool spring days – the air was so clear it was difficult to take a bad photo. 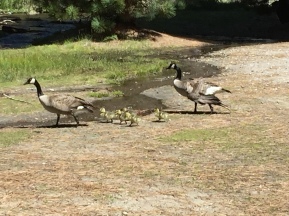 The Lassen volcano is classified as non-dormant, which I guess is less threatening than

saying “active”? Hot spots are scattered through the park with steam geysers, sulfur vents, and bubbling mud pots. Although it can’t compare with Yellowstone’s scale and scope, this little brother park to Yellowstone is a beautiful place to visit.