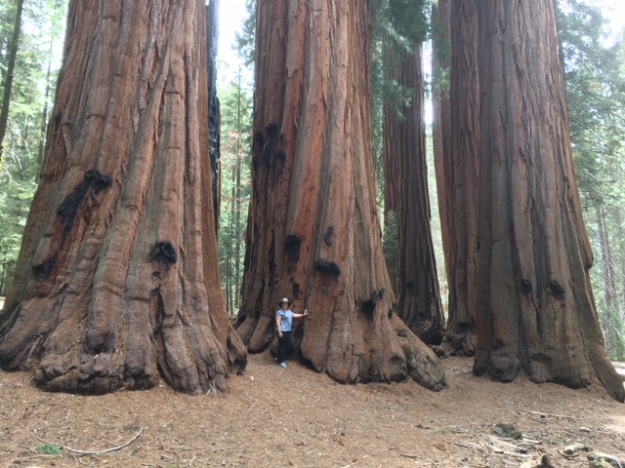 I’ve gotten a bit behind in my blog postings lately. Part of the reason was a business trip to Chicago last week, which occupied much of my time. Soon after I got back, we moved on to our current location which is about 2 hours from Yosemite National Park and we’ve been busy exploring. So let me catch you up! 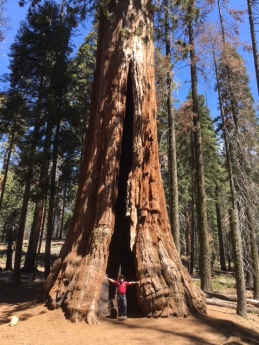 I’ve already described some of our experiences visiting the giant sequoia trees, and that is certainly a park highlight. There are several areas where you can find the giant trees, including the largest in the world (the General Sherman tree) found in Sequoia NP. Kings Canyon NP has a similar giant tree grove with the second largest tree in the world (General Grant tree). Both areas have trails that wander through these groves, providing an opportunity to feel both awestruck and humbled. We spent several days exploring these special areas.

Another Sequoia NP highlight is the climb up Moro Rock, a huge granite outcropping. The road up to the trail head was closed for the season, adding about 1.5 miles (each way) to the hike. Upon reaching the Rock, a 330 step ascent takes you to the top, which affords a spectacular 360 degree view of the surrounding mountains.  Even though the climb is a huffer-puffer, it is so worth it. I was happy to see there were guardrails at the top, otherwise I don’t think I would have had the courage to venture out! We lucked into a spectacularly clear day, other days later in the week were clouded up. 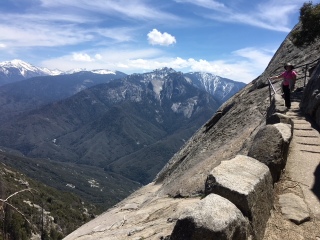 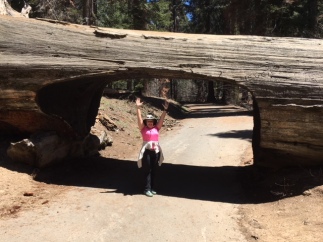 Continuing a little further up the same road is the Tunnel Log. When the log fell back in the 30’s, they just cut a tunnel in it and left it there! Fortunately, a bypass road is available for high vehicles.

The road to the Kings Canyon area fortuitously opened for the season the very week we arrived. We took the motorcycle for the long trek up to the park, through the National Forest, and finally into the Canyon. The road was incredibly scenic and worth the trip in itself. The glacier-carved U-shaped King’s Canyon was absolutely beautiful. Spring melt had the waterfalls in full pour and we even saw two bears (Mama and cub, I think) browsing the spring greens. Most of the sights in the canyon are right off the road, so it’s mostly a driving tour, unless you are doing a backpacking hike out of the canyon.

Because of our rig’s size, we stayed at a park about an hour outside of the south entrance to Sequoia NP, which made every visit to the park a fairly long day. Our campground was located in farm country, so there wasn’t all that much to do besides the parks. We did venture into the nearby town of Visalia to take in a movie – Avengers: Infinity War. And Jeff found an A&W root beer place nearby so he could get his favorite root beer float. It’s not all just about nature – we’re doing normal life stuff, too!