The term “sky island” is something I’ve learned while traveling out here in the desert southwest. It’s not the floating islands seen on the planet Pandora, but it’s still cool nonetheless. A sky island is an isolated mountaintop ecosystem, surrounded by a radically different lowland environment. The valley floor by Tucson is nothing but desert, but travel up into the mountains and you find broad pine forests and a cool, damp environment you’d expect to find in a much more northern latitude. It’s made possible by the mountain elevation that cools the air and snatches moisture from the clouds.

We drove the motorcycle up to one such sky island outside of Tucson when we traveled to the ski resort area of Mount Lemmon. It was 80 degrees in the valley, and 54 degrees at the 8000 feet mountain top, with many patches of snow still evident. It was a spectacular drive, twisting and winding up the mountainside. We stopped for lunch at the Sawmill Run Restaurant. I had one of the specials, the duck Reuben sandwich which offered a duck breast pastrami twist on the usual sandwich. It was richly delicious, served with sweet potato tater tots.

We also visited the Phoenix Renaissance Faire, one of the largest and longest running faires in the country. I’m a big Ren-faire fan, attending the Florida version annually for more than 20 years. I was excited to find a faire near our travels! Unlike the Florida faire, the Arizona faire has a dedicated venue with permanent building structures. It was truly like visiting a (sort-of) medieval village. The 30 acre site was definitely one of the largest Ren-faires I’ve ever been to. It was also hugely popular, with looooong lines at opening. There were 13 stages with almost continuous entertainment, jousting, a petting farm, falconry demonstrations, and a ton of street entertainers. Did I say it was huge? There is simply no way to see everything in one day. My favorite act was “Hey Nunnie Nunnie”, two “nuns” with silly songs and lots of  (gentle) religion humor. I loved it and thought they were hysterical. [What do you call a nun who lives upstairs?  Nun of the above! What do you call a priest in nun’s clothing?   A Transistor!] Another fun act was the Cirque de Sewer which featured cute trained rats and cats. Anyone who can train cats to do anything reliably is pretty cool in my book.

I’ve been to the Ren-Faire and my Spring is complete. 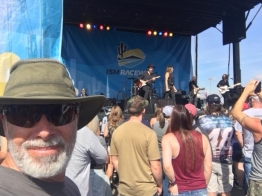 The main reason we visited the Phoenix area was to attend a NASCAR race at the Phoenix ISM Speedway. Jeff bought tickets several months ago, so we arranged our travels around the ticket schedule. It’s not my special thing, but it’s always interesting to be part of the racing experience. The ticket included a pre-race concert by country singer Jana Kramer. I didn’t recognize the name, but I had heard one or two of her songs.

It was quite a busy weekend – Saturday being the Ren-Faire and Sunday, the race. Monday meant packing up and heading to our next spot near Sedona!