The Big Bend area of Texas is a vast corner of wilderness where desert meets mountains and the Rio Grande River. The area includes two large parks (Big Bend National Park and Big Bend Ranch State Park) and several small towns to explore. Our RV park was tucked right into the middle of it all.

Big Bend National Park is one of the least visited parks in the US due to its remote location, averaging only around 380,000 visitors per year. In contrast, our beloved Great Smoky Mountain National Park hosts over 11 million visits per year! As a result, Big Bend definitely feels wild and remote by comparison. At times, you will literally see no one on the roads or trails.

The National Park amenities include scenic drives, hiking trails of varying lengths, several visitor centers, campgrounds (both primitive and  with hook ups) and even a lodge. The volcanic origin Chisos Mountains occupy the interior of the park, thrusting  to nearly 8,000 feet in altitude. They are surrounded by a vast desert expanse, interrupted at intervals by massive water carved canyons. At the south end of the Park winds the sinuous Rio Grande River. Due to the terrain’s variety, there are a number of ecosystems contained within the park including deep desert, grassland, river floodplain and forested mountain. It is a geologist’s playground, with its ancient seabed, marshland, volcano and water erosion past all written in the rocks. Fortunately, I carry my own geologist with me. The area is a hotbed for fossils – a dinosaur bone exhibit describes the extensive fossil record found there.

I haven’t spent much time exploring the desert and was struck with how harsh the environment seems. The sun is intensely hot, making even a cool day seem overly warm. I can’t even imagine how hot the summer would be. Everything growing is spiky and uninviting. Yet, hiding under the spikes is the occasional shy flower. You can see for miles, making distances deceiving. It’s beautiful, but a forbidding beauty. It’s nice to explore and see, but frankly, not someplace I’d want to stay for a long visit. 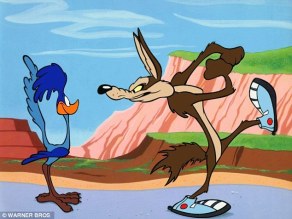 It amazes me that anything can live successfully in this environment, but wildlife and people do indeed live here. Driving around the park we spied a coyote and then, shortly after, a road runner. Immediately the cartoon theme song jumped into my brain and stayed as an earworm for the rest of the trip. [Road runner … the coyote’s after you. Road runner … if he catches you you’re through!]  Now it’s in YOUR brain too! <evil chuckle>

We also caught our first glimpse of a small mammal – the javalina. It looks something like a cross between a feral pig and a guinea pig. I “borrowed” this photo from the national park service website so you can see what it looks like. These tough little guys munch down prickly pear and other spiny vegetation with no problem at all. He scuttled away from us quickly, but I don’t think I would want to tangle with him.

People have also weathered this harsh environment for thousands of years as evidenced by ancient rock art and crumbling remains of settler homes and outbuildings. 100 year old windmills still pump water into cisterns, maintaining small oases in the desert expanse.

Speaking of oases, the south end of the park includes a small hot spring which bubbles up and over into the Rio Grande. Once a resort, the corralled spring still delights tourists looking for a relaxing dip. I wouldn’t want to test it during the summer, but on a 50-degree day, the 105 degree hot spring was quite inviting.

Next up:  the Big Bend adventure continues!