I’m very blessed to have a wonderfully close family. My parents are in their 80’s and my siblings and I are all north of 50 and are scattered over the US, yet every year without fail, we have managed to get together for the Christmas holidays. Every year. There were the occasional years where one sibling couldn’t make it, but that was the exception. Our holiday gathering has been our tradition and treasured family time together that is much looked forward to. This year, we varied our routine and rented a house on the Isle of Palms near Charleston, SC for our family holiday.

Wow, what a fantastic beach house – even better than the photos! It had FOUR levels: 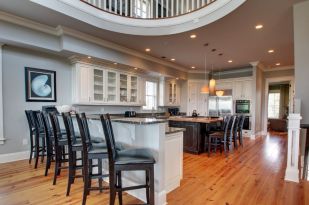 There was even an elevator!!! That was a blessing as going up and down all of those stairs was difficult for our mom. The unusually cold weather inhibited outdoor activities, but with that fabulous space it didn’t matter so much. We just enjoyed the heck out of that house, cooking favorite meals, drinking great wine, playing games, watching movies, and just enjoying doing what we do. Jeff and I stayed at a nearby KOA, only 20 minutes away.

Despite the cold weather, we ventured out to explore the Charleston area. We visited the Charleston Museum, America’s first museum,  which offered a fascinating look at the city’s long and storied history. ($12/adult, open 9a-5p daily, allow at least 2 hours).  We took a 2 hour walking tour of historic downtown Charleston which, at $20 each, seems a bargain in history/dollar! Spending so much time in newly minted South Florida, I forget just how far back some of these eastern cities go. The city has figured prominently in two wars (Revolutionary and Civil), survived fires and a major earthquake, and still stands proudly. I also learned interesting facts, such as the difference between a graveyard and a cemetery. Do you know?  I didn’t! A graveyard is attached to a church and a cemetery isn’t. Huh. Another interesting historical stop is the Old Exchange and Provost Building.  Admission to this three-story historic public building costs $10 and includes a guided tour of the dungeon which is built over a section of the original Charles Town city wall. 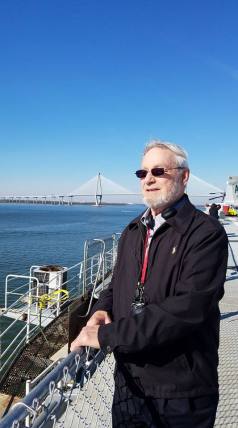 Dad on the USS Yorktown

We also visited the Patriot’s Point Naval and Maritime Museum. Home of the USS Yorktown Aircraft Carrier, there is also a Destroyer and Submarine to explore. Cost is $22/adult, $6 for the optional audio tour box. You can spend all day here! There are multiple self-guided tours on the ships that provide a fascinating glimpse into ship-board life and times.  If you are at all a military buff, this is a must-see. I’m not necessarily a buff, but found it fascinating.

One of my personal favorite stops was a visit to the Charleston Tea Plantation, the only tea plantation in North America! I’m a huge tea fan, as I don’t drink coffee, just drink tea for my morning caffeine fix. There is a self-guided factory tour (free) and a half-hour tram tour of the Plantation grounds and greenhouse ($12).  They weren’t processing tea, since it isn’t harvest season, but I learned how it’s done. They simply mow the fresh green tops off the tea bushes with a special big green machine, truck them into the factory to chop/oxidize (for black tea) or steam (for green tea) and dry it. That’s it! They get 8-12 cuttings per bush per season, depending on weather. The free tour also includes all-you-care-to-sample hot and cold teas, which I took full advantage of. And then I bought some, of course! The cinnamon and spice tea is especially tasty.

It seems that it isn’t a family gathering without illness, and we had our share this year. One sister came with a cold, and two of our members came down a nasty, but short-lived, case of suspected food poisoning. Not from our cooking (!), but from a local Subway, we theorize as the only common denominator. But despite illness and the unusually cold weather for the area, we had a fantastic time together. And being together is what the holidays are all about. 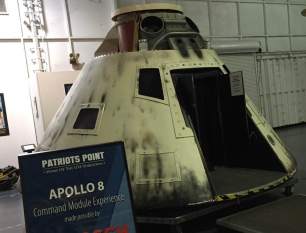 2 thoughts on “Wrightsman-palooza does Charleston!”