What do you do when you’re in Orlando?  Why, go to the theme parks, of course!

In our two weeks in Orlando, we ended up buying passes for 8 days of theme parks, which was a bit more than we originally intended! Here’s how it happened — Disney has 4 parks, so we figured we needed a day each. We had a one-day park-hopper pass left over from a previous purchase, so bought a 3 day pass for me and 4 day pass for Jeff.  Universal Studios has 2 parks (well, 3 if you count the new water park) and the parks are smaller so using the same logic, 2 days of passes would do, right? BUT, Universal Studios had this super Florida resident special where you bought a 2 day pass and got 2 additional days for free! How can you say no to two free days?? So, there you go, 8 days of theme parks!

If you come to Orlando and want to play in the theme parks, definitely check out the pass options online before you arrive. There are always a variety of options and often special deals, especially if you are a Florida resident. Universal Studios passes are discounted if you purchase online and you can pick up your tickets easily at the will-call kiosks located outside the entrance to each park, however if you purchase a Florida resident ticket, you will have to show your ID at guest services.

It was great fun! All of the parks decorate and have special themes and shows for the holidays. We were here during the first two weeks of December, which is touted as being “less busy” than other times. We found that Universal Studios wasn’t too crowded, but Disney always got busy by mid-day. The rides at Universal rarely had lines exceeding 30 minutes or so, but the most popular Disney attractions (such as the newly-opened Avatar section) could quickly build to queues of two hours or more.

Universal Studios / Islands of Adventure highlights:  The Grinchmas Who-liday Spectacular, Harry Potter areas (Diagon Alley and Hogsmeade) and the Hogwart Express train that connects them, the holiday projection light show against Hogwart Castle, Universal’s Holiday Parade, and all of the usual fun rides (the Hulk, the Mummy, Men In Black Alien Attack, RipIt RockIt Roller Coaster) and shows. The regular shows, such as the Blues Brothers, offered a special holiday version. It was great fun, but 4 days was more than we needed to cover everything. 2 big days or 3 mellow days would do it. We ended up spending 2 long days and 2 half days there. On our last day, we were tapped to participate in market research: we simply watched 20 minutes of video, answered questions about one of the commercials and received a $20 Universal gift card each! Cool!

There are 4 Disney parks:  Magic Kingdom, Epcot, Hollywood Studios (formerly, MGM) and Animal Kingdom. 4 days is simply not enough time to see everything! The parks are large and you have to rely on Disney transportation to get from one park to another (as opposed to Universal Studios where you can walk from park to park). There are so many highlights it’s difficult to single out just a few, but I’ll attempt: The new Avatar area of Animal Kingdom, Holiday around the World at Epcot’s World Showcase, Jingle Bell Jingle BAM! projection/fireworks show at Hollywood Studios, Happily Ever After projection/fireworks show at Magic Kingdom, and the Candlelight Processional at Epcot. We purchased a Candlelight Processional dining package for the four of us (Sean, Marissa,  Jeff and myself) which guaranteed seating at this hugely popular show. I absolutely loved it!

It was exhausting but, I have to say it … magical! 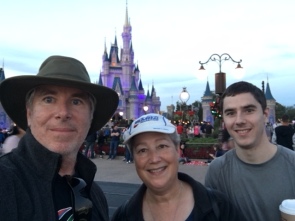 8 days in less than 2 weeks was probably a bit too much, even for us. I averaged around 20,000 steps each theme park day! 8 days in three weeks would have been about right. We did have time to fit in some other activities. Sean and Marissa were able to join us for some fun at the Disney parks and we are going to see the new Star Wars movie later today in IMAX 3D! Jeff also cashed in a 15 year old coupon for a Richard Petty Driving experience at the Daytona Speedway. He was quite impressed! We also enjoyed a few activities here at the KOA including Bingo night and Friday night line dancing.

If you go – here are a few theme park tips:

Next stop – Jacksonville! Maybe we’ll have a little down time, or, maybe not!